In April of this year Powerball took over California. The lottery game is currently open to 45 of the 50 US states. In August the jackpot had swelled to over $400 million dollars and people lined up for the chance to change their lives with the $2 investment.

The 7-Eleven on Almaden Expressway in San Jose was not new to lottery winnings. Many have deemed this location a “lucky store” thanks to two giant wins just in the month of May. The first California Powerball winner came from this store when a San Jose City College student bought a ticket that matched five of the Powerball numbers. Even though he didn’t win the record-breaking $600 million jackpot he still came away with a nice chunk of change at upwards of two million dollars. After taxes have their way it should be roughly 1.5 million. 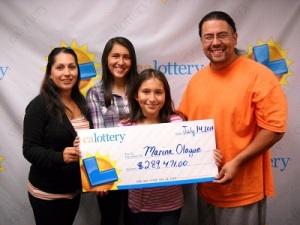 Marina Olague and her family after winning the Super Lotto

Also at this location in May a Sacramento woman won over $200,000 dollars on a super lotto ticket purchase. When her husband checked online and told her they’d won she thought he must be joking! Soon she found out that was anything but the case.

Since I have been so busy with school, work, and work (ha) it’s been very difficult for me to find time to edit my own work. I decided to stay up late and work on this package because I had such a fun time working on it. Many thanks to Scott Rates who let me tag along on his story, shot great footage, and got the crowd pumped. I was definitely taking notes! In the end no one from the store won the Powerball, but who knows what the future holds for this 7-Eleven who proudly hangs their banner that reads “Millionaire Made Here.”