It’s been one year since three teenagers died on their way to a canoe trip.

A group from Faith Chapel Assembly of God in Overland Park was driving on Highway 13 near Bolivar, Missouri. Suddenly, a wheel blew out on the church van, causing it to careen into a ravine.

Now, church pastors Bob and Sondra Cave want to see some changes to prevent crashes like this in the future.

The Caves said they wish they understood the dangers of 15-seat passenger fans before the crash, and they’re urging others to never use them again.

“It was just horrible. It was the worst news you could possibly think of,” Bob Cave said.

A year seems like a day for the Faith Chapel Assembly of God in Overland Park, Louisburg and Gardner. Pastor Sondra Cave said her husband, Bob, was getting ready to perform a funeral when they got the call they never expected. The phone kept ringing and ringing.

“There’s been an accident,” Sondra said. “It’s a bad accident. The van rolled. We have fatalities. Multiple fatalities. Didn’t know what that meant, didn’t know who they were — we knew nothing.”

On August 10, 2018, a youth group float trip headed to the Ozarks crashed on Highway 13. Their 15-seat passenger van went off the road when the back right tire blew.

The van and the trailer it was carrying flipped multiple times killing 14-year-old Hannah Foy of Louisburg, 16-year-old David “Tommy” Martin of Olathe, and 17-year-old Samara Bayse of Stilwell. Three others, including youth leader Tim Abbott, were seriously injured. 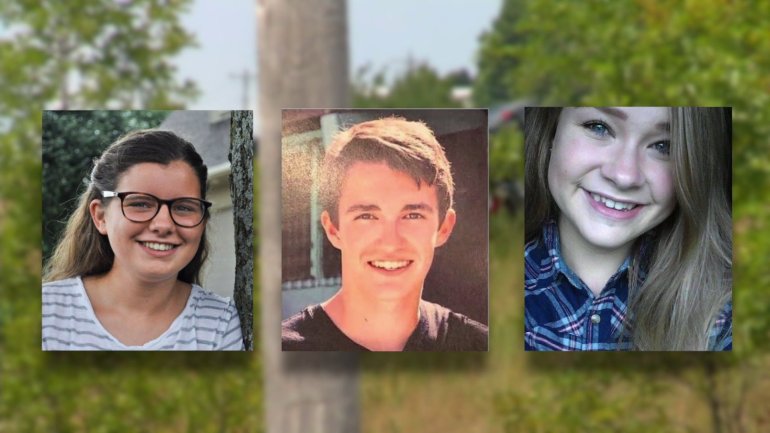 After the crash, the pastors said they believe these vans shouldn’t be on the roads or used by churches.

“We’ve really become aware of how dangerous these vans are,” Bob Cave said. “They say if you have one to get rid of it, to sell it. And if you can’t sell it right away, don’t put more than nine people in it.”

“This is not something you ever want anyone ever to have to experience,” Sondra Cave said. “If we can be an advocate for that, and we can bring awareness and people can think about it and make a change — let’s do. Let’s do.”

On Sunday, their church’s tree campuses came together to memorialize the teens by planting trees in their honor.

Remembering Samara who was a youth leader in their church. Tommy who led worship with his dad at their Gardner campus, and Hannah who’s memory is inspiring people across the world to read the bible in a year.

“It’s just a reminder that life, their life, their legacy, their memory is living on, and it’s just important for all of us to have something that reminds us because they made a difference,” Sondra said.

“Life goes on, and their life and their memory continues to grow in our hearts,” Sondra said.

In the year since the crash, Samara’s family moved into a new home, and her sister got engaged. Each year she was a counselor at Faith Chapel’s summer camp.

The Caves said the kids had a picture of her printed and displayed in a prominent place at camp to remember her. She would have graduated high school in May, and she was recognized posthumously at their church’s graduation celebration.

Hannah’s mother was inspired by the loss of her daughter, and her love of the Bible, to create Hannah’s Best Year Ever Challenge.

Just days before Hannah died she finished the Bible, and told her mom because she’d finished it was the best year ever.

Tim Abbott is recovering from his injuries, including traumatic brain injury and a broken neck.

His wife, Rachel, who helped him in his recovery and was taking care of their three children, died suddenly on December 30, 2018 of what doctors believe was a brain aneurysm. FOX4 viewers and members of the community stepped up to help him in his time of need.

He’s since been cleared to drive, and continues in his recovery.

The Caves said they would support legislation banning the vans nationwide.

Until then, the National Highway Transportation Safety Administration has issued safety guidelines for 15-passenger vans. They include checking the tire pressure every single time the van is used in order to prevent a blow out.

The Assembly of God of Kansas has asked the more than 100 churches within their network to not use the vans, and the national Assembly of God organization has published information informing churches about the dangers that come with using the vehicles.