A series of unfortunate events may leave one Kansas City, Kansas family homeless.

After a tree fell on their home weeks ago, it’s a race against time to put the pieces back together.

AJ Reese is not a contractor, but he’s having to learn quickly.

“Instead of putting a window here to save this wood, because it was bending in here and caving down, like bending in — we just put in framing,” Reese said.

On July 3, he said he found “Charles the Tree Man” on Facebook because he needed a tree trimmed.

A tree near his home was causing damage to his roof. The city told him he needed to fix the roof, so he wanted the limbs trimmed to keep further damage from happening.

Reese said he didn’t realize the Tree Man didn’t actually know how to do the job. When things started to go south, he started filming “Charles” working on the job.

He cut several of the branches off, but when it got to the bigger ones, he told Reese he didn’t “want to get up in there and mess with that thing.”

He said he then cut it at the base and didn’t cut enough off the top — before the tree came down. 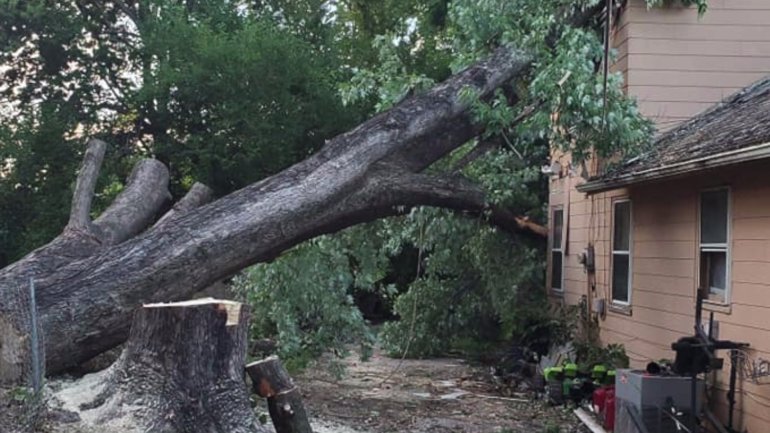 “I grabbed my kids from upstairs out of the room just in time,” Reese said. “Right when we exited out the door, that’s when the tree fell.”

Now the single father of four boys is left to clean up thousands of dollars in damage to the home without insurance.

“All he said was he’s sorry, and he has no insurance, and he left,” Reese said. “I was in shock, so I didn’t get to catch him or say anything. I was just in shock. I was shocked like — my house. I literally just shut down like everything was over.”

He said after the man fled, he called the police to try to some help. A tree removal company who knew what they were doing came and got the tree off.

“If I lose my house, me and my kids will have nowhere to go,” Reese said. “They lost a lot. They have no beds. They have no clothes. Their toys are gone. It’s all gone. Everything is gone.”

He’s received about $5,000 in donations through Gofundme and his employer, Hermes Landscaping. They also lent him a box truck for the materials, and a dumpster was donated to help him clean up.

He said he has the materials to put it together, but doesn’t have the tools or the expertise.

“I need help, a lot of community help,” Reese said. “I need a lot of help to put up the rest of the walls. Anybody that knows anything about drywall. I don’t know anything, but I’m here trying to learn. I’m just trying to keep a positive vibe, a positive mind, to stay strong and keep this going no matter what.”

KCK Police said they’re looking for “Charles” and will help Reese file his civil case when they do find him.

Reese is asking for anyone with professional expertise in remodeling homes to help him.

If you are able, you can reach Reese at 913-602-7851 or aj.mobgame@gmail.com. If you don’t have experience, but would still like to help, you can donate to his Gofundme page here.

His four boys lost most of their belongings in the accident, as the tree landed on their bedrooms. Reese said they’re in need of school supplies for the next year, school uniforms he plans to purchase from Walmart, bunk beds and furniture.