It was her first time at Allen Fieldhouse to see the team victorious over Eastern Michigan University. Hattie Long, from Whitewater, Kan., had a day like none other when KU made the day much more special than a W.

Allen Fieldhouse before any home game is always electric, but on Saturday it had a little more spunk than usual.

It was her first time visiting Lawrence and said she’s never seen anything like the Phog. 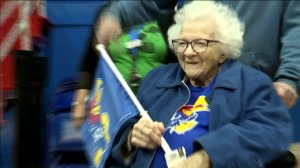 “She’s like a kid in a candy store to put it mildly, I think,” her grandson Dan Ravenscraft said.

Ravenscraft said his grandmother can’t hear very well, or see much, but he helps her enjoy the games as much as he can when he visits her.

“We sit up there and watch the TV and I shout out the score to her, and how much time is left in the game, and tell her what color KU is in for the uniforms there and what direction they’re going and she sits there and says, ‘GO KU – SHOOT, SHOOT, SHOOT!’” Ravenscraft said.

Long had some advice for KU Basketball coach Bill Self before the game.

The next best day of her life was on her 100th birthday when she got a special gift from Self himself.

“Well, when I first got the letter congratulating me on my 100th birthday – that was wonderful,” Long said.

“She took that and she carried it on her wheelchair around her care facility that she’s lived at for four years, and proceeded to show and tell everybody what that was all about and say – see what I got!” Ravenscraft said.

However, pictures no more. Now, Long has a memory. She got to meet Coach Self after the game and even got a kiss on the cheek. The players all posed for a picture with her, and signed a poster for her.

Long lives in an assisted living facility out in Whitewater, and two of the ladies at the facility made the day possible for her along with her grandson. They traveled with her to the game as well.

If you are wondering what Hattie’s secret to long life is besides KU Basketball, the answer is onions. Especially sweet onions. They are her favorite, and when she was younger she used to eat them like apples. She said, before she came to the game she was sure to put them on her hamburger.