Summer of Love: Leawood woman falls in love on Facebook with man in Gambia

A lot of people meet on the internet these days, through apps, on websites and even Facebook.

One Leawood woman met her husband four years ago through the social media site. They biggest problem they faced — he lives in Gambia.

Keri Swartz is a Paul Walker fan. When he died near the end of 2013, millions of people took to the internet to mourn his loss along with his celebrity friends.

Swartz follows Tyrese Gibson’s page as well, and he posted about the loss of his friend Walker. Swartz said she made a simple comment on his post that changed the direction of her life.

“He saw my comment on a post of an actor, actually, and then he sent me a friend request,” Swartz said.

She said she hesitated but accepted Sanyang’s request.

“I accepted it, and then he sent me a message: ‘Thank you for accepting.’ I was like, ‘Yeah, OK,’” Swartz said. “Then we just started talking.”

The couple started an online friendship that led to a relationship over time.

For years the couple talked over Facebook and Whatsapp. Not only did Keri and Sheikh’s relationship grow, but he became close with her son, Alex, who has autism.

Sanyang said he knew he wanted to be with her from the moment he saw her picture. He proposed to her one night while on a talk through Whatsapp — and Keri said yes.

“A year ago, I went there. And if I thought I loved him before that, the minute I met him it was just 10 times that. It was amazing,” Swartz said. “We laughed, and we just never stopped talking.”

Keri was in Gambia two days, and then in a leap of faith they got married. 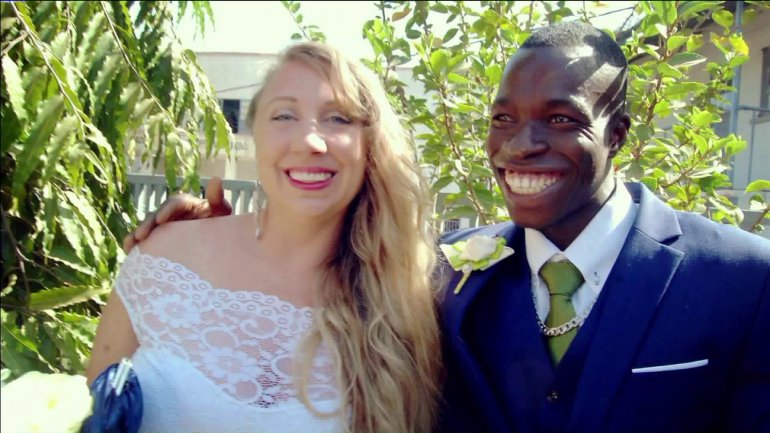 The couple had a wedding with four dresses, two cakes and 300 guests. They got married at the justice of the peace and also at a local mosque. The whole community came out to celebrate their union.

For the past year the couple has been working through the U.S. immigration system, and on Thursday they got good news: that Sheikh is coming to America. He passed his immigration interview and was given a visa to come to the United States.

Keri said she can’t wait to have her husband in real life with her for the rest of their lives.

“If you love someone, just go for it,” Sheikh said. “No matter where the person is, even if the person is somewhere you cannot reach. You will reach them by love.”

Sheikh is expected to come to the United States in the next few weeks. Keri said she’s planning a big homecoming party to welcome him to his new life in America.