There are 24 democratic candidates running for president, and Thursday night 10 of them will face off in the second opening round debate.

But there’s one candidate’s face you won’t see on TV tonight. A metro man is also running for president. Ryan Von Bevern said he’s “possibly qualified” to be president, but that’s really up to you.

The Democrat said politics aren’t really his thing, but he knows he can do some good if he’s elected.

There are a lot of signs near the intersection of Southwest and 7th Street trafficways, but there’s one that may have caught your eye.

“This is my billboard, and I’m really running for president,” Von Bevern said.

FOX4’s Sherae Honeycutt asked him if his campaign was some kind of joke.

“Define joke. I am actually running for president. I am eligible. If I get 65,000 contributions and poll enough in the polls, then all be up on the debate stage,” Von Bevern said. “I’m about 64,900-something donations away.”

He said the billboards came from campaign contributions made by family and friends. 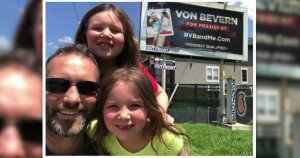 “Me and my daughters got to go take pictures next to our billboards, and they thought it was amazing,” Von Bevern said. “To me that’s a 100% win right there. I’m the only politician that has already won in this campaign.”

He said if for some reason he doesn’t make it to the White House, he will donate the remaining contributions to charity.

We asked him about how his campaign Twitter following is going.

“How’s my Twitter? It’s pretty awful honestly,” Von Bevern said. “I have eight followers, but hoping to get there.”

He actually has 23 at the time of this article, but that’s still around 61 million less than President Donald Trump.

“I’m definitely not as good as the commander in chief with my Twitter game,” Von Bevern said. “I’ll have to step that up.”

He also knows he’s not the perfect presidential candidate.

“If I make it onto the debate stage there’s no way that the media is not going to see me doing something silly, or something that a politician should never do. So I might as well get it out in the open now. Yeah, absolutely, there’s going to be a picture of somewhere, of something silly,” Von Bevern said.

Von Bevern said he really does want to be president and hopes to get your vote.

“I hope that if you see a guy from Kansas City that’s just trying to bring a smile to your face and that politics matter, but we don’t have to do them the way we are right now,” he said.

He won’t be watching the debate Thursday night because he says he has priorities: his daughters’ softball game.

As for his wife, Heather, she said she doesn’t believe it’s probably in voters’ best interests for him to be elected because he plays too much golf and poker.

Look for him to be playing next week in the World Series of Poker in Las Vegas wearing a campaign t-shirt.