Blue Springs police still haven’t arrested anyone in the assault of a man who was giving someone a ride home from a bar.

Jarret Peters remains in the hospital. The Peters family provided this photo below and says he has stabilized but he faces a long recovery because of a traumatic brain injury. 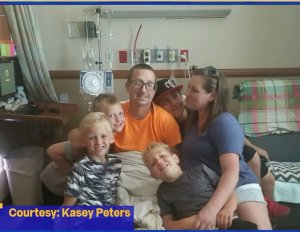 On June 9, officers responded to a disturbance call near NE 5th Street and NE Knox just before 3:30 a.m. At the scene officers found Peters seriously injured in the middle of the road next to a vehicle.

Peters was taken to a local hospital with life-threatening injuries.

Investigators later learned Peters gave a ride home to someone from a local bar. After he dropped that person off, he drove a short distance before he encountered someone in another vehicle and an altercation ensued.

No suspects have been identified at this time.

Anyone who may have seen who was with Jarret at the local bar or may have witnessed the physical altercation is encouraged to contact the Blue Springs Police Department at (816) 228-0151 or Detective K. Lange (816) 228-0102 or the TIPS Hotline.