A new kind of daycare is coming to Kansas City.

It’s the first of its kind and specially built for kids recovering from cancer, transplants and other medical conditions.

The innovative center will transform a now empty warehouse on Cherry Street near 31st Street and will soon be changing children’s lives. RJ’s Children’s Haven will offer a safe daycare environment for kids dealing with some of the most difficult medical conditions.

Mohamed A. Radhi is on the advisory board and has been working with kids who have cancer for more than 20 years.

Kids like 6-year-old Lincoln Brewster who was born with Chédiak–Higashi syndrome, a rare autosomal recessive disorder.

He had a bone marrow transplant when he was seven months old, and his mom Brittany said she struggled dealing with daycare for him. As a single mom she said she was lucky to have help from her family, but even then it wasn’t easy.

Brewster said a place like RJ’s could have changed everything for her and Lincoln when he was younger.

She said she would bring Lincoln to daycare always afraid that her phone would ring, and he would be going back to the hospital.

“It’s difficult,” Brewster said. “It’s scary getting calls from daycare and them saying he had another seizure, or he’s running a fever, or this kid has this illness just so you know. It’s hard to take him knowing someone has taken their kid that’s sick, or you know that people take their kids when they’re sick because they can’t miss work.” 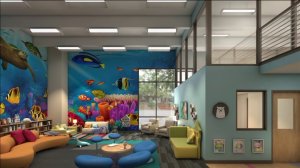 Rhadi said the facility will have nurses on hand, and staff trained to deal with immune safety. They will also have a special air filtration system and shoes won’t be allowed in the building.

“That’s the most important thing we can do to those kids is to put them back in a normal environment as soon as possible so they don’t feel they are isolated or different, or they are sick,” Rhadi said.

“I will definitely be volunteering, and I think it will be a wonderful thing for kids and families in Kansas City,” Brewster said.

He said about 200 children are diagnosed with cancer each year locally.

“Kids with cancer deserve the best, and they are going to be healthy and normal,” Rhadi said. “They just need some time, and we can help bridge the gap in their life cycle.”

The center plans to serve children from 2-8 years old and be open from 7 a.m. to 6 p.m. five days a week. They hope to open the doors in August.

They’ve raise around a million dollars with in-kind donations to renovate the building, but are about half a million dollars short of their goal. If you would like to help this nonprofit, there are several ways to give on their website.