A metro woman who almost died during childbirth is giving back.

After an amniotic fluid embolism last year, she said it’s amazing she’s alive. Meghan Jolliffe said it wasn’t just doctors and nurses that saved her life, but donors as well.

Jolliffe said she was so happy to give birth to her son in February 2018 when her scheduled induction turned into an unexpected fight for her life.

Her father, Russell Viers, said he hadn’t planned to go to the hospital right away to give his daughter space, but then he got a phone call he never expected from her husband.

Jolliffe said her doctor immediately started blood transfusions and gave her 109 units of blood. The average person has between eight and 12 units in their body. Jolliffe said it took seven hours for doctors to stabilize her.

Her kidneys began to fail and had to have dialysis treatments. She said her heart stopped for 14 minutes, and she was rushed to the ICU for an emergency c-section.

Jolliffe said her son didn’t have oxygen for seven minutes and was moved to the NICU.

“They just kept it going, and they did whatever they had to do to keep her with us,” Viers said. “We just held on for the ride.”

Jolliffe said she had to fight to recover. She had to learn to walk again and had extensive nerve damage. She spent weeks in a fog. Her doctor and family had to fill her in on everything that happened weeks later.

“I can’t imagine the heartache that my husband and my family had to go through watching not only me, but him as well, and the tubes and everything that he was connected to,” she said. 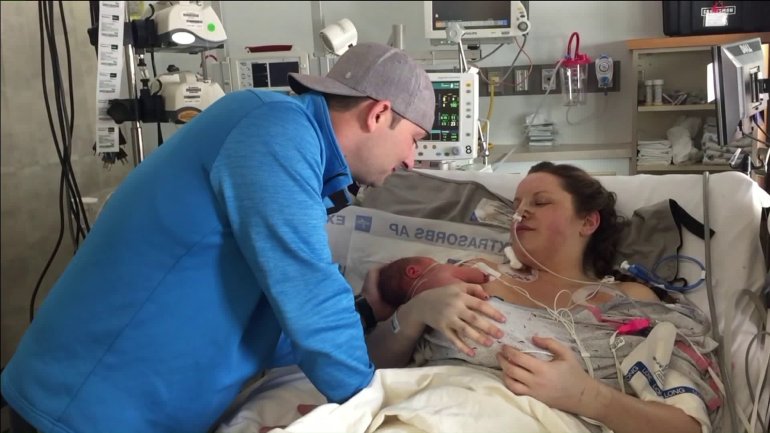 Jolliffe recovered and said she felt triumphant the moment she was able to hold her son, Sullivan, on her own on her feet. A sight indescribable for her father, who is grateful to see where his daughter is today.

“Speechless,” Viers said. “They gave me my daughter for the rest of my life, hopefully.”

“I just want never for a doctor to say, ‘Maybe we’re wasting resources,’” Jolliffe said. “I want them to be able to throw whatever they need to throw at that person, and give them the best chance to fight for their life.”

Her goal is to raise back the blood that donors gave her and Sully, and maybe a little more with the help of family and friends.

They all came out to a blood drive at Overland Park Regional Medical Center put on by the Red Cross. Everyone got to see Meghan and Sully smiling and having fun when just over a year ago they wondered if either of them would survive.

“You just smile,” family friend Tim Perdieu said. “You think about life. You think about things. It makes you reevaluate life and your priorities in life.”

“It’s amazing to see her and Sully,” said Judy Hendrix, director of women’s services at OPRMC. “We’ve been fortunate to be able to visit with her a couple of times since then. They’re a very special family to my whole unit. Everyone remembers her story.”

“They came from everywhere,” Jolliffe said. “They dropped everything to help us, so this is my way of giving back. This is how I hope to pay it forward.”

Jolliffe said at the end of the day they were able to collect 91 units coming up 18 units under her goal. She said it’s just inspiration to get more people to donate blood to save lives.

If you would like to donate blood through the Red Cross, you can use this site to find a blood drive in your area.