Kansas City is getting ready to show it’s Irish pride.

Both Snake Saturday and the St. Patrick’s Day Parades are happening this weekend. It doesn’t happen very often, but this weekend will be 48 hours of Irish celebration.

Green said it’s only happened six times in the history of the parades that they’ve been back-to-back. North Kansas City’s Snake Saturday started in 1983, while the KC St. Patrick’s Day parade began in 1973.

“For this year, being on a Sunday, we’re expecting really great crowds — especially because the weather is going to be so wonderful. We have 150 entries,” KC St. Patrick’s Day Parade board member Erin Gabert said. “That’s one of the biggest we’ve ever had.”

North Kansas City Police Chief Steven Beamer will be the grand marshal on Snake Saturday, and actor Eric Stonestreet will serve as grand marshal at the St. Patrick’s Day Parade.

“We’re really excited to welcome him to the parade this year,” Gabert said of the Modern Family star. “He actually has kind of a fun history with the parade. He was a clown in our parade when he was in high school, and he was part of a group that was with the parade committee that went and entertained the kids at Children’s Mercy Hospital.” 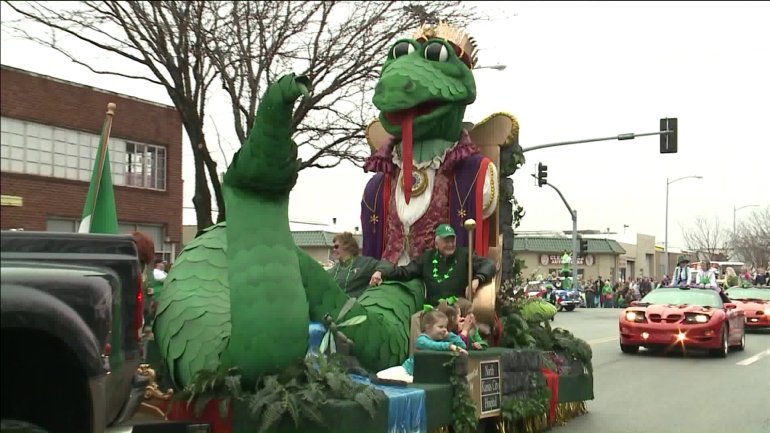 Snake Saturday’s parade is specifically tailored for families and kids. There will be games, face painting, a carnival and live music. Drinking is not allowed along the parade route.

Green said he loves to see the kids enjoy the time with their families each year.

“That’s what this is for is to have fun. When you see the parade lined up they’re happy with that,” he said. “When you see the kids riding the rides and enjoy thing the things, you go, ‘This is fulfilling. This is what Snake Saturday is all about.’”

Snake Saturday’s parade route begins at 16th & Swift in North Kansas City, and winds around Armour and then down Howell Street. The St. Patrick’s Day Parade will travel down Broadway from Linwood to 43rd Street in Westport.

If you’re looking for parking, Green said you want to make sure you’re early to Snake Saturday and don’t block anyone’s driveway.

In Midtown, Metropolitan Community College is a good place to park, but most spots will charge you a fee. Here’s a full map of parking options.

“You’ve been cooped up all winter,” Green said. “It’s been a hard winter. Come on down and have fun.”

“Come on down,” Gabert said. “We would love to have you. It really is so much fun. It’s really an incredible feeling to be down here with all these people. It really is true that everyone is Irish for the day, and there’s a ton of families, and it’s just an exciting time and something special to be a part of.”