The event celebrated 125 years of the organization and empowering job seekers with different abilities. They highlighted the success of their clients who overcame barriers and work to build Kansas City’s workforce. They also highlighted employers that give opportunities to people of all abilities.

Edward Lada Jr., the CEO of the local Goodwill organization, said he selected McElligott to speak at the event because he believes he can give the city a peek into what the future holds for America’s workforce, especially for those with disabilities.

“We share very similar passions about making sure that people with disabilities and other barriers of employment aren’t left behind,” Lada Jr. said. “I’m a firm believer that we need to get ahead of the future state of work as it relates to robotics, automation, the internet and things of this sort because it’s going to rapidly change what work means for the people that we serve.”

McElligott’s company, York Exponential, works in robotics development and integration. Their mission is to focus on augmentation and not just automation.

York creates what they call collaborative robots that he said are more of tools than automated workers. They also work to develop autonomous ground vehicles, drones, and computer vision systems.

York has been around for about four years, but in the last 18 months McElligot said they’ve ramped up production.

McElligott said in the future you’ll see more and more robots, but they won’t be taking people’s jobs away from them.

He believes they will be tools for people to use and work with. Their goal is to make sure people aren’t left behind as technology develops in the next decade. 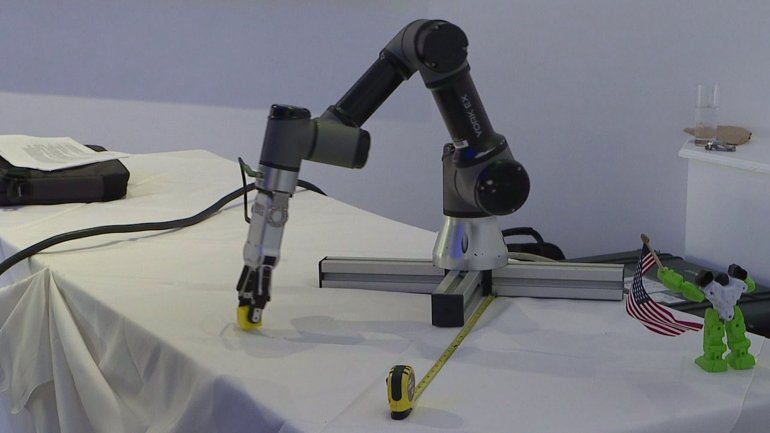 “The reality is technology is moving at such an incredible rate that some of the people that will be left behind are the people that need to be helped the most,” McElligott said. “We won’t have haves and have-nots. We might have haves and have-nevers. So part of what I’m here to do today is to bring everyone up to speed on what’s happening, and where we’re going, and the importance of organizations like Goodwill so nobody gets left behind.”

“It’s not to replace humans, but it’s to augment humans,” Lada Jr. said. “Make it more efficient, make it more productive. What I see is using robotic technology, like what York Exponential is developing, to work alongside people with disabilities. Whether it’s cognitive disabilities, physical disabilities, and allow them to be more productive, and be more integrated into workforce within Kansas City, and the general area.”

McElligott said our nation is moving into a fourth industrial revolution. The first being the creation of the steam engine, then electricity, and the third being computer digital technology, including the internet and streaming.

Lada Jr. said Kansas City could be at the forefront of that fourth revolution.

“This though is going to be very, very different,” McElligott said. “The fourth industrial revolution will be powered by artificial intelligence, robotics, the internet of things, quantum computing. It’s going to be way more impactful than any revolution we’ve had before. Think back if you were in 1890 and you told someone they’d be able to fly. They would have slapped you in the face, but the reality is within their lifetime you could not only fly like a bird, but faster.”

He said the cause of the “next revolution” is not just the development of robotics, but the changing workforce.

McElligott said the amount of Baby Boomers retiring is creating a gap for many business owners, and robots will become more prevalent.

“Every day 10,000 baby boomers retire. When that cliff happens in about five years you’re going to see a huge increase in the demand for robots just like these,” McElligott said. “Within the next 5 years is when you’ll see it phase in, but once the baby boomers retire completely, that’s when you’re going to see robots like this all over the place, and that’s probably a 5- to 10-year timeline.”

To those who believe this is an effort to take jobs away from Americans and automate much of the work once done by humans, McElligot said that’s far from the case.

He believes it actually creates opportunity for anyone with interest to grow their skills.

“This technology represents an incredible opportunity to level the playing field,” McElligott said. “To create wealth. To create new jobs that didn’t exist. But more importantly, to create an opportunity for people that have been left behind before to be forerunners, and be the first to embrace this technology.”

“I think what you’ll see is the first opportunity in probably a long time that generational wealth won’t matter,” Lada Jr. said. “People that have dealt with generational poverty right now can go learn anything, learn about coding, learn about robotics online, and really get educated to leapfrog, and get out of bad situations.”

Lada Jr. said this is something they are looking at for the future of Goodwill and how they will conduct business. He believes it can especially help their employees with disabilities be more successful and productive in their work. Lada Jr. said if they decide to fully integrate in the future anywhere from 10-15%  of their workforce would use robots in their daily work.

“Our hope is that by leveraging this type of technology, and taking care of the people that we serve, that we are a pillar of the community for an integrated workforce,” Lada Jr. said.

“Kansas City has an incredible opportunity just like every other small community across the United States,” McElligott said. “We don’t have to be left behind or left out of what Silicon Valley is doing. We can chart our own path using and embracing this technology.”

McElligott said through York he’s planning to open a college to train robot mechanics, so not only will people work alongside robots in the future, but they can repair and work on them as well.