Pups on patios: It’s something people in Kansas City like to share with their furry friends, but it’s never been legal — until now.

There’s a new option for business owners that would allow patrons to bring their dogs to dinner.

“I think that’s a great thing to sit outside in the sunshine in nice weather with your family and dog and just kind of enjoy being outside and around other people,” Midtown resident John Stoner said.

A new variance through the health department allows business owners to apply for an option to allow four-legged friends to tag along to happy hour.

Restaurants like Brewery Emperial are looking forward to applying.

“You want to be in compliance with the city at all costs,” general manager Candice Moore said. “I think having this kind of guideline and approval for that will actually give us some kind of relief that it’s OK, and nothing bad is going to happen.”

Last summer, John Stoner and his daughter went to Kansas City Councilwoman Jolie Justus, hoping she could help make a change. Stoner’s daughter, Lucy, even had a playful protest at Country Club Plaza. She stood in front of J.C. Nichols Fountain with a sign reading “Pooches 4 Patios.” 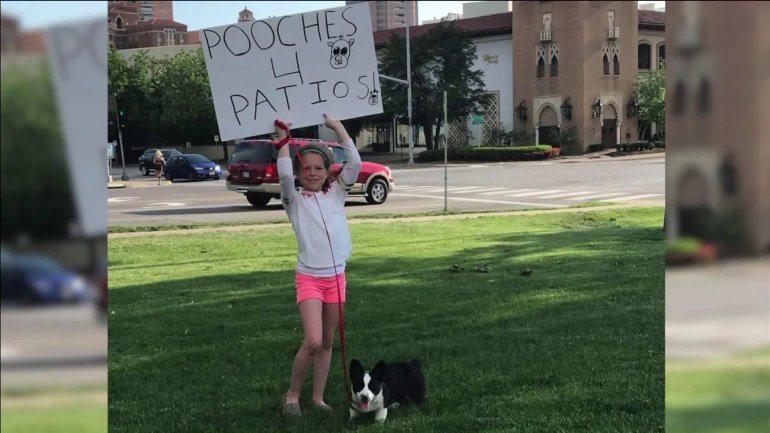 Justus said Lucy made quite an impression on her.

“She wanted to make sure she could bring her dog to a patio, and the fact that the city was able to respond so quickly to have that particular dog owner and to have her dog back on a patio — that was a really big deal for us,” Justus said.

“She’s so excited,” Stoner said. “We’ve already gone to a couple places. She just loves sitting outside and being next to the dog.”

Justus worked directly with the health department to create the dog-friendly patio variance. It has 14 requirements ranging from having a separate entrance to a service sink outside.

It’s something Granfalloon owner Tim Caniglia said will be expensive.

That way businesses can focus on both their two- and four-legged guests.

“We all love animals here. So when we see a dog, it kind of brightens up your night,” Moore said. “Maybe it’s a really busy day, but you have some cute little bud that want’s to say hi.”