The Chiefs’ home opener against the 49ers is only a few days away. Do you have your gear ready?

One Kansas City store is having trouble keeping a new t-shirt design on its shelves. The Chiefs new quarterback Patrick Mahomes is quickly becoming everyone’s “Ma’homie.”

Chris Harrington and Ben Smalley are close friends and lifelong Chiefs fans. However, over the past few months, they’ve made a new pal they can depend on.

“Patrick Mahomes threw six touchdowns last week. Once that happened, I was like — I need this shirt. I’ve got to rock it. He’s our quarterback. Anyone in the city couldn’t be more excited,” Smalley said.

Good thing for him Harrington makes shirts for his store, Westside Storey in KCMO, and Smalley brought him the shirt idea: “Patrick is Ma’Homie.” 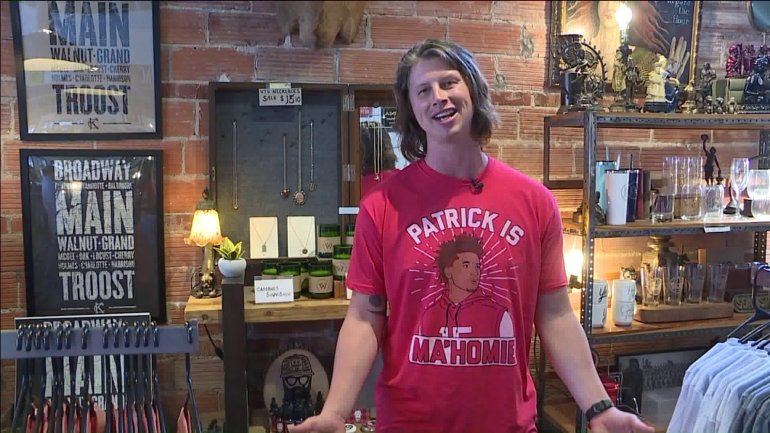 “We have sold out of many runs,” Harrington said. “We’ll set a pre-sale online and generally will sell about 70 percent of that, and so we just have a little bit by the time we actually get our shipment in.”

They’ve sold so many — around 500 of them — it took Smalley a while to get one of his own.

“This is the fifth time I’ve been by this shop, my friend’s shop, trying to pick up the shirt that I told him he should make,” Smalley said. “I’m pretty excited to have it on Red Friday.”

He’s not the only one who’s been waiting and also thinks their homie Patrick is worth the hype.

“This is what we’ve been waiting for,” customer Tiffany Frenking said. “I love Alex Smith, and I miss him, but I don’t think he could do this for us.”

“Yeah, he’s worth the hype,” Smalley said. “He can do everything. I had a 15-minute conversation with another friend of mine today about which touchdown was our favorite.”

That one may be hard to pick, but it’s clear which shirt goes all the way.

“Oh, I love it. As soon as I saw it online I tried to get it,” Aquino said. “Tried to get it — they said it was on wait. Called up here and they held me a couple.”

“I just thought it was really clever, and hilarious,” Frenking said. “I thought every time I wear this I’m going to look down at my shirt and just chuckle because it’s super cool.”

If you want your own Ma’homie shirt they are available in limited quantity for $32 bucks at Westside Storey in KCMO and on their website.