An event Saturday in Overland Park helped a family of 12 get back on the road and honored a serviceman killed just weeks ago.

One by one, the motorcycles rolled in behind The Peanut for people to remember those they’ve lost.

Justin Murray, the president of Support Special Operations Forces, puts on a Memorial Day ride each year to give back. 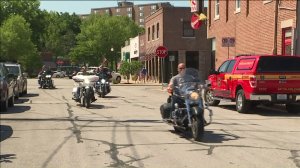 “I’ve buried 33 marines and sailors over the years, so Memorial Day has nothing to do with me. I was proud to serve, but today it`s about them,” Murray said.

Jimmy Matz came to the event to remember his dad. The group stopped at Leavenworth Cemetery to honor him on their ride.

“My dad was a Vietnam hero. He served three tours in Vietnam,” Matz said. “My dad’s a hero because of what he sacrificed for this country, and for us to have the freedoms that we have today. So that’s exactly why I`m here, and not just for my dad, but for all American heroes that have fought for this country.”

A serviceman like Cody Harter who lost is life three weeks ago when he was stabbed in a road rage incident in Lee’s Summit. Harter served in the Air National Guard and did two tours overseas. The money raised from Saturday’s ride will go to his family.

“To come home and get killed is, I mean, on such a senseless situation — there’s nothing really I can say. It just breaks my heart,” Matz said.

Sandra Styles’ boyfriend, Mark Costanza, deployed back in April with the Kansas National Guard. Between the two of them they have 10 children.

“Our car, a few months ago, had broke down. The engine had blown. So, I had no way to get another vehicle,” Styles said.

Cars 4 Heroes honored her boyfriend, still serving, by getting them back on the road.

The money raised was through registration fees, donations and merchandise. The organization said all the funds from the event will go to Harter’s family to help with whatever they need.