Pups on patios: Yay or nay? Some say it’s great, and others groan. The Kansas City Health Department says it’s against the rules.

Recent complaints are causing concern for canine lovers and longtime patrons of patios that have always allowed furry friends. However, many are now asking if owners can leave their dogs at home.

Owners like John Stoner who loves his corgi puppy Oscar. He and his daughter take him wherever they can and especially love patios that allow dogs.

“In the evening, if we want to hang out, we might choose a restaurant where we can go to happy hour and have our dog with us. Well now, it might just steer us to stay at home on our porches,” Stoner said.

He’s talking about those recent complaints to the Kansas City Health Department that are causing a fuss. The health department said they aren’t patrolling for puppies, but if a complaint comes in — they have to look into it.

Stoner contacted the health department in a number of tweets, and he and his daughter took to the streets in protest. The girl stood in front of J.C. Nichols Fountain with a sign reading “Pooches 4 Patios.” 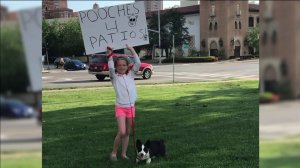 “It made me angry because I’ve seen so many Kansas City things offering which patios are dog friendly. A lot of tourism, and stuff like that. I live in Westport just because I can walk my dog around and go eat (at) places that are friendly for dogs and my daughter,” Stoner said.

The health department says it’s the rule and has been since 2005. It reads that dogs can’t be in areas where food is prepared or served.

They said in a statement:

“The Department has received several requests to provide clarification regarding animals on restaurant patios. The KCMO Food Code, adopted prior to 2005, states in chapter 30 section 71, 6-501.115 that ‘live animals may not be allowed on the premises of a Food Establishment.’ A Food Establishment is defined by the Code as ‘an operation that stores, prepares, packages, serves, vends, or otherwise provides food for human consumption.’ An area in a Food Establishment where these actions occur would be subject to the prohibition of live animals; this would include patios where table service is provided. Exemptions to this requirement include service animals as specifically defined in the KCMO Food Code. For additional questions, please contact the Environmental Public Health Program at 816-513-6315.”

However, there is one place in KC that does allow dogs and drinking: Bar K. Stoner said he’s a member there and goes regularly.

The bar allows dogs and also abides the city rules, making it an ideal spot for dogs and their owners.

“We’ve had so many friendships formed in here because of the dogs. This is a simpler place where people feel authentic connections to each other in a real way, and I think that`s the beauty, and the power of what we are doing,” Dodell said.

Stoner said places like Bar K are awesome, but he’d like more of his favorite places to let him bring his dog.

“Let the businesses decide, and if people are complaining, they can pick different restaurants if it bothers them so much,” Stoner said.

Bar K is getting a brand new location opening in July. It will not only have a full dog park with shade and bar, but a full kitchen and restaurant.