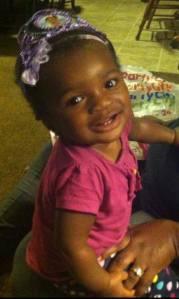 Baby Daphne is a story that has become close to my heart. The little girl went missing while I was working at the desk and as I’m working two days a week every week we have been talking about this little girl. Tomorrow it will be one month since she went missing and there have been, what seems to be, no leads in this case.

One month ago Daphne’s father, John Webb, called police. He told them that his daughter had been abducted from his SUV parked in front of a liqour store in East Oakland while he went inside to make a purchase. The woman was described as a light skinned African-American woman who simply opened the car door, picked up the child, and walked out the door. Never to be seen. When Webb returned to the car he found the child gone and called the police. 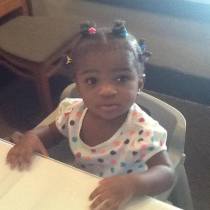 Upon their arrival they began to collect information about the situation at hand and issued an Amber Alert for 21 month old Baby Daphne. Very quickly we received word at KRON as did the whole Bay Area. The FBI became involved shortly after that and by the end of the day Webb was arrested on child endangerment charges. When he allegedly left Daphne in the car she wasn’t alone. Her 80 year old grandmother with dementia was watching her. The police decided that based on this information the child was put in a dangerous situation, but Webb was released two days later without Alameda County pressing charges.

What is confusing for many is that the the last date that Daphne was seen by someone outside the family was two weeks prior to her disappearance, June 27th. This means that the only individuals that are known to have contact with the child since this date are her father and grandmother. On July 17th her family held a vigil for her. Daphne’s maternal grandfather, mother, and father were all in attendance. Klass Kids, an organization started by abducted Bay Area child Marc Klass became involved in the search and Klass himself spoke at the event.

I had the opportunity to meet Mr. Klass and talk to him about the Webb case. He told myself and Scott Rates, a reporter for KRON 4 News, about what the Oakland Police Department should be doing next in their search for the toddler.

Below please find my report with the help of Scott Rates.