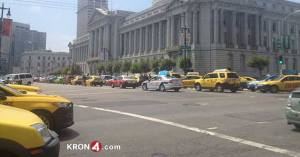 “There’s something big going on down here!” I yelled into the phone at the morning intern. Looking around City Hall I didn’t see any news vans. All I could really see is a sea of taxi cabs and all I could hear was….. the blaring sound of car horns. She hung up the phone as I emailed my supervisor to see what was going on. Halfway to the station she asks if I can get video. OF COURSE. Yes. I email back that I am turning around. After shooting B-Roll for about 20 minutes I get notice that J.R. Stone is on his way to me.

The taxi drivers were causing such a demonstration in regards to the new ride-sharing movement. Companies like Lyft, Sidecar, and UberX offer a service almost like a taxi, but cabbies want to be clear that this is an option that can leave riders in a sticky situation. I talked to many drivers who explained that when you get into a car with a ride-sharing service that they do not have the proper insurance to cover the riders safety. Taxi companies have business insurance and pay fees every year to insure that riders are safe in San Francisco taxi cabs. Ride-sharing services require that drivers

have their own car insurance which uses a work around that they are not actually running a business. These drivers are just giving a ride from one person to another and the rider then ‘donates’ money to the driver.

Many riders feel that companies like Lyft offer a necessary service in a time where there are very few taxis in one of the US’ largest cities. When you are coming out of dinner or a club late at night especially on the weekend it can be difficult to find a cab. Many San Franciscans opt to walk or use a ride-sharing service that will arrive faster than a taxi. Some women feel that there is even an issue of danger while waiting for a cab to arrive.

Here is my package with help from J.R. Stone. The images shown above were taken by myself and published on kron.com.

Baby Daphne is a story that has become close to my heart. The little girl went missing while I was working at the desk and as I’m working two days a week every week we have been talking about this little girl. Tomorrow it will be one month since she went missing and there have been, what seems to be, no leads in this case.

One month ago Daphne’s father, John Webb, called police. He told them that his daughter had been abducted from his SUV parked in front of a liqour store in East Oakland while he went inside to make a purchase. The woman was described as a light skinned African-American woman who simply opened the car door, picked up the child, and walked out the door. Never to be seen. When Webb returned to the car he found the child gone and called the police.

Upon their arrival they began to collect information about the situation at hand and issued an Amber Alert for 21 month old Baby Daphne. Very quickly we received word at KRON as did the whole Bay Area. The FBI became involved shortly after that and by the end of the day Webb was arrested on child endangerment charges. When he allegedly left Daphne in the car she wasn’t alone. Her 80 year old grandmother with dementia was watching her. The police decided that based on this information the child was put in a dangerous situation, but Webb was released two days later without Alameda County pressing charges. 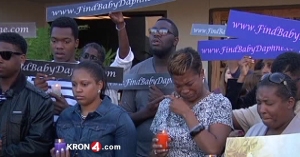 What is confusing for many is that the the last date that Daphne was seen by someone outside the family was two weeks prior to her disappearance, June 27th. This means that the only individuals that are known to have contact with the child since this date are her father and grandmother. On July 17th her family held a vigil for her. Daphne’s maternal grandfather, mother, and father were all in attendance. Klass Kids, an organization started by abducted Bay Area child Marc Klass became involved in the search and Klass himself spoke at the event.

I had the opportunity to meet Mr. Klass and talk to him about the Webb case. He told myself and Scott Rates, a reporter for KRON 4 News, about what the Oakland Police Department should be doing next in their search for the toddler.

Below please find my report with the help of Scott Rates.

I know I haven’t posted as much since I started interning at KRON and the reason for this is I’ve been BUSY! They are keeping me moving and I like it. Since I started I’ve had the opportunity to go out with reporters which has been a ton of fun. There are a few stories that I’m currently working on, but this is the first one I got the chance to put together.

When the desk sent me out with Dan Kerman that day we assumed it would be a pretty cut and dry day. We went to the arraignment for Barry B. White or as he’s known in the news ‘The Jewelry Mart Killer.’ At the time there was little details about what had actually occurred in the South of Market store, but in court we heard all the details.

Before we entered court we noticed a man approaching with his elderly parents. The man was Tun Oo, the brother of one of the victims, and took questions from the media. He gripped my microphone while he pled to investigators to make White pay for the crimes he’s committed. He also told us about how he had learned of the incident on the news. He told us when he saw the Jewelry Mart on the news he knew his sister was dead. The truth was only confirmed when he arrived at the hospital and the wife of the owner fell to her knees and cried for forgiveness.

Oo entered court, and sat discreetly in the back with his parents to hear what White had to say for himself. He was brought before the judge and quietly awaited the arraignment to begin. What I learned that day is that for the District Attorney’s office to obtain the ruling of ‘no bail’ they must give detail and reason as to why the suspect is a danger to the public. 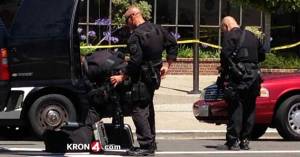 Scot Clark, the Assistant District Attorney, laid out the exact reasons as to why White should not be released on bail. “This is not a who dunnit” he said, and began to tell the judge that this crime had been recorded on not one but three high quality cameras where White’s face is clearly displayed as he committed two murders and attempted to kill another. The disagreement stemmed over the price of an item costing no more than three hundred dollars. White returned to the store after the purchase and disagreed with the amount he was charged. After arguing for some time the owner gave the suspect money to refill his meeter. When he returned he waited for other customers to leave, approached the owner, pulled his gun out and at almost point blank range opened fire.

He then turned his attention to the female employees, shooting them numerous times, then pulling out a knife. He is described to have slit one woman’s throat “from ear-to-ear” and nearly decapitated the other. By the time police arrived he fled the store opening fire on a number of police officers. When White ran out of bullets he was then taken into custody. Police then inspected his vehicle only to find a loaded AK-47. In the end White was held without bail and his arraignment was delayed until July 31st. In the arraignment he pled not guilty to two counts of murder, seven counts of attempted murder, six counts of assault on a police officer, and one charge of possessing an assault rifle.

Here is the package I put together on the incident with the help of Dan Kerman.